Putting my foot down 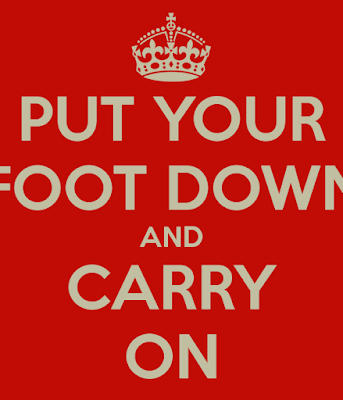 This is a continuation of my previous post "When you're standing behind the scenes, you're still abusing".


I am currently in the process of learning to 'put my foot down', after I realized that it's something I sort of never learned to do. My parents never really 'put their foot down'. Or at least, I always found ways to be able to lift that foot lol. There was always ways to 'manipulate' and 'get around' the foot. A lot of 'insecurities' and 'doubts', which they weren't even aware of, that I could exploit and take advantage of to still get my way. And so I more learned that I can ALWAYS 'get away with' doing what I want, as long as I know how to manipulate.

And I've found that even in my process, in relation to myself, I have that attitude. Of manipulating myself to still get away with self-interest and abuse, and exploit whatever insecurities and doubts I have to make me waver in my decision to not accept any abuse. To still 'get around' the foot that I'm trying to put down. Of giving myself the run-around and messing with my 'authority' in the same way that I messed with my parents' authority - just because I could.

Because yes, there was a weakness, and it needs to be exploited lol. Because yes, my parents should have been more steadfast, assertive and certain of themselves. Cause you can't expect your child to 'respect your authority' when you yourself don't entirely. Just like me, I need to be more steadfast, assertive and certain when making decisions and 'putting my foot down', not giving myself any leeway to abuse or manipulate. Standing ABSOLUTE. When I say 'no more abuse', then I mean 'no more abuse' with my whole being. 'No if, and or buts about it.'

Learning to say 'NO' essentially. Because, somebody has to. Cause I suppose it must be a generational thing, to have that 'weakness'. The 'weak constitution' which I also realized and referred to in my previous blog post, "When you're standing behind the scenes, you're still abusing". It's basically 'pity'. Which is a disempowering form of 'empathy' in a way lol.

Pity is a result of a sense of victimization within self, when you've been 'wronged' in some way and you're still stuck in blame. And you go 'oh poor me and what's been done to me'. And you believe that you are a 'victim', entirely disempowered by your own reactions to 'what happened to you'. And that sense of disempowerment/victimization/blame does run in my 'generational lineage'. So that was a 'weakness' I could exploit in my parents.

I knew that their pity would make them question their own decisions. It would make them think, 'oh, maybe I'm being too harsh' or 'maybe I'm being inconsiderate', 'maybe I'm being a bad person'. So if I acted REALLY hurt and victimized, and got them to pity me, I could manipulate their decisions. But within that process I then obviously also learned to operate according to the same programming - of accepting an 'inner weakness' as the experience of disempowerment. Something that actually started out as just a way for me to manipulate my environment so I'd get what I wanted.

But really what all this comes down to, is just this point of 'I don't want to do this'. I don't 'feel like'/I don't 'want to' do whatever it is that I'm supposed to be doing. So I pretend like it's 'too hard' and it's 'too difficult' and 'oh poor me, crumbling under all this pressure, and the overwhelmingness!' While, there's really nothing wrong with my 'ability' to do it, I simply just 'don't want to' and I'm trying to worm my way out from under it.

So from that perspective, putting my foot down means to stop buying into my own bullshit lol. Stop buying into this whole 'I'm so weak. I'm so disempowered'-act. Cause really, so far I haven't really found anything that I'm genuinely not able to handle. And most of my 'I can't handle this' has been a consequence of my DELIBERATE over-pressuring myself just to generate and create a mental/emotional state of disempowerment, for the sheer purpose of manipulation.

And I now need to do what my parents essentially should have done, which is to tell myself to 'get over it' basically lol. 'Just do it' and stop whining, stop deliberately victimizing yourself, stop blaming, anytime I see myself finding excuses/reasons/justifications to not follow through on and undermine my decisions. Simple.